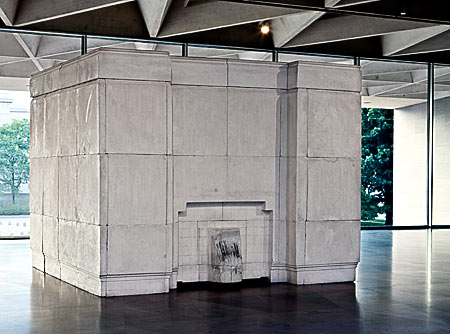 This is a pretty awesome video describing Rachel Whiteread’s process for the work Ghost. Easily her most recognized work, Ghost is a set of plaster casts that provides three-dimensional, positive space to negative space. She cast the space of a parlor in a Victorian townhouse in North London (then abandoned, now demolished). She wanted to “mummify” air.

I love Whiteread’s approach of trying to make the negative positive. I sometimes think about doing that with Gauguin, but I just can’t, Rachel. I just CAN’T.

She took the plaster mold approach to an entire house in Wennington Green, East London, shortly before its demolition. The name? Get ready…Ghost House.